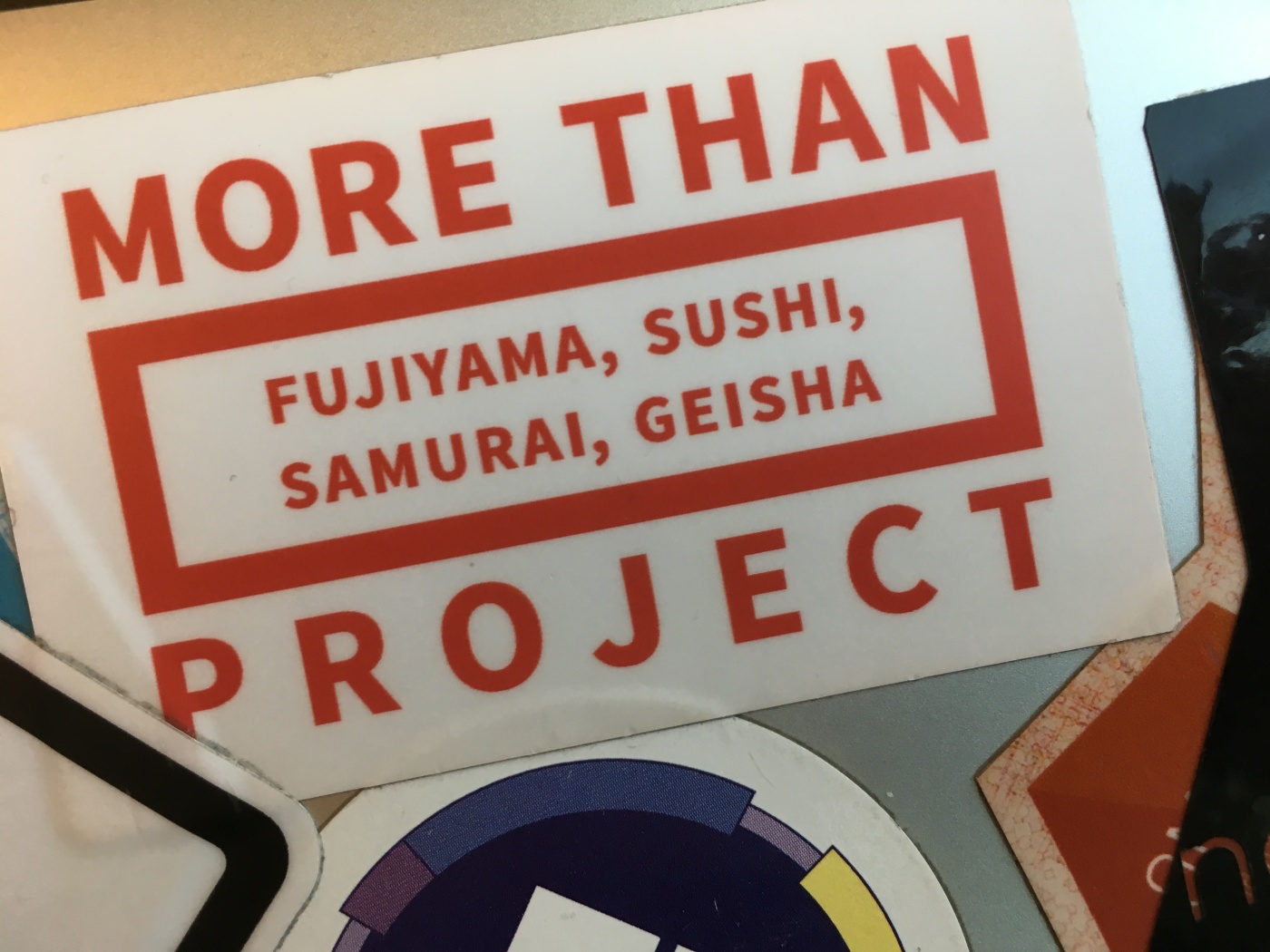 At the FabCafe in Shibuya some years ago, I picked up a sticker: MORE THAN [FUJIYAMA, SUSHI, SAMURAI, GEISHA] PROJECT. (It is actually a project from 2014-2016 to promote products from Japanese artisanal companies by Loftwork).

Having lived so long abroad, I understand why this sticker / this project exists. Especially in the last few years, sushi has taken off and you can pick some up at any convenience store, even in a land-locked country like Switzerland.

Yet that sticker is missing one of the biggest cultural exports of this country: anime and manga.

Even back in the 70s when I lived in the suburb of New York City with my family, I recall being in ESL (English as a Second Language) class, and arguing with a non-Japanese child there that Space Battleship Yamato is Japanese. He argued that this cannot be a Japanese comic, as everyone had non-black hair, and they all had big eyes.

Long ago are the days of arguing over facial features and hair colour.

The influence of Manga and Anime is outwardly visible everywhere. Again, even in a small country like Switzerland, there is a festival dedicated to introducing Japanese culture to French-speaking Switzerland, which puts cosplay contests just after cultural workshops on their list of activities.

Some say it is the afficionados of BD (bande desinée) that made Francophones receptive to Manga. Maybe it is more than 150 years of bilateral relations with Switzerland and Japan. I will leave it up to the sociologists how this came about and why.

In the source country, manga is so pervasive, there is no surprise that even study guides have been manga-fied.

I find that there are always eye-catching books in Japanese bookstores. Well-designed, beautiful books on physiology, or calculus are just lying about in a large-ish bookstore by almost any major train station. I love Japanese book design (as much as I love others too, like the French paperbacks, and childrens books). 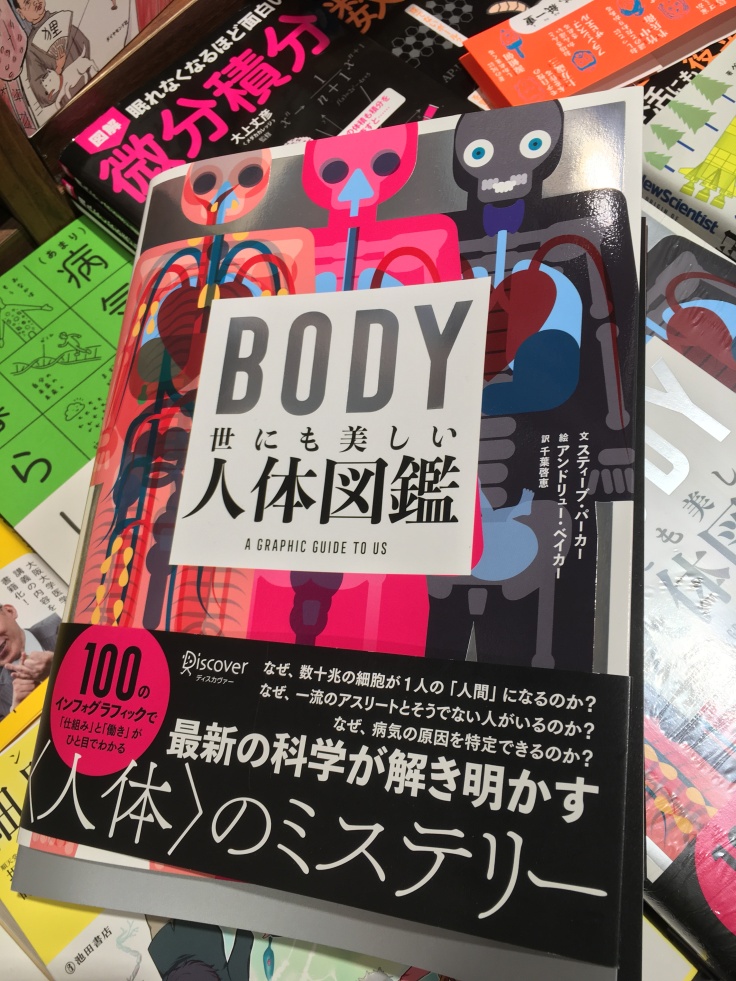 Back to Japanese book stores. There are large how-to- and DIY sections with beautiful books. Now fermentation is popular, and there are tons of books on this subject. There are lots of study guides for entrance exams, many of them illustrated and with great explanations on different subjects, even modern wet lab techniques. Imagine XYZ for Dummies, but you have a plethora of choices, all illustrated, not just that one brand.

As I was killing time in between a flight and a train connection, I wandered into the technical section.

I walked through the Statistics section.

Super busty girl in a slip-dress holding a cat. It makes me wonder if they imagined the audience to be heterosexual cis-male. There is another research subject for a Japanophile sociologist or a feminist, critical thinker.

Why
am I
surprised.

Whatever floats your boat?

Even Bayes theorem had a manga explanation. 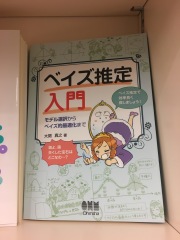 It makes me want to try reading some of these books on different subjects where things have filtered out of my brain, maybe being selective about some style of illustrations over others.

The programming section was also stocked with translations of the very familiar O’Reilly’s series, with their beautiful sketches of animals decorating their covers with one band of colour.

And if playfulness was introduced into study books, I wonder how much the current schooling and curriculum reflects the need to play, as articulated by Mitch Resnick in Life-long kindergarden?

In Japan, there is obviously the problem of mandatory English curriculum that barely produce a tangible population who are able to speak the language (and yes, the language section has lots of fun study guides, in many languages, including English!) – whether it be the lack of confidence, or the fear of making mistakes. For example, the scientific journal Nature series translates their English articles only into Japanese,. Every other language speaker has no option but to read the article in English.

Maybe the abundance of English conversation books with accompanying audio on these bookstore shelves is because people finally want to learn outside of the school system.

Any population has all different learning styles and abilities that are not always corresponding to the teaching styles or the given curricula.

Our ability to contribute to society could and should be measured in more than one or two styles of evaluations.

There are changes being made to the Japanese university entrance exams, so people are judged not for the knowledge only, but for their ability to synthesize and form and express opinions.

For example, spoken English exams will start for the first time, albeit without the power of a unified launch, in 2020.

For sure, if the entire future depends on how you perform on one type of exam, or if those taking the “technical track” are not required to pass a humanities and English exam, the message seems loud and clear. Uniformity is what is being asked of Japanese university goers, and people studying science or engineering do not need English.

Yet there are so many types of study guides, it seems that at least the publishers understand there are people who learn in different (albeit via a 2-dimensional medium) ways, at different times of their lives.

Bookstore shelves tell many stories about a country.

This is why I like to go to bookstores when I visit a new town.